One Sampson Community College student club is kicking off the fall semester right where it left off. SCC’s Psychology Club, known for its participation in charitable events in Sampson County and elsewhere held its first meeting of the academic year this week.

“Our mission is understanding who we are, where we want to go, and supporting each other along the way,” says Sarah Burgin, Psychology Instructor at the college. “We spread mental health awareness, donate time and energy to those in need, and make a difference in removing the stigma of mental illnesses.” 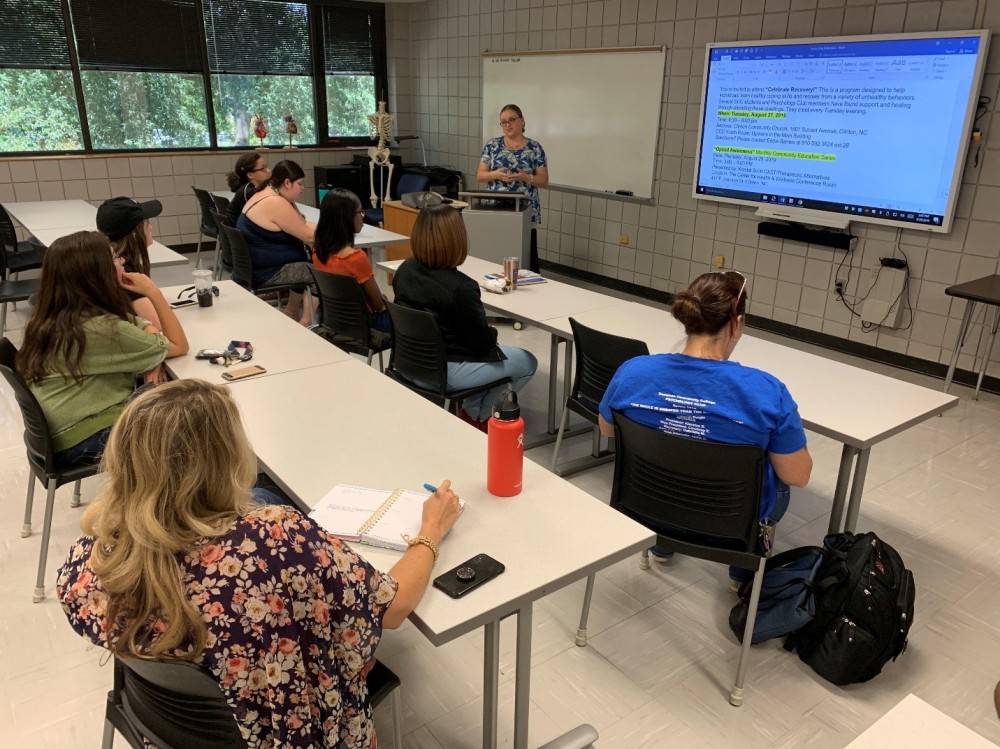 Burgin leads the first meeting of the Psychology Club this fall

The club has been very active since its inception last year under Burgin. Recently, the club attended Fayetteville’s Second Annual Furr Fest, an effort to help find pets new homes and get as many as possible out of animal shelters. Members participated in last year’s Walk to End Alzheimer’s. Alzheimer’s is a type of dementia that causes problems with memory, thinking and behavior. Symptoms develop slowly and get worse, becoming severe enough to interfere with daily tasks.

The group also participated in Samaritan’s Purse where members packed several boxes last Thanksgiving, doing its part for the cause. Operation Christmas Child welcomes anyone from children to seniors to volunteer packing shoebox gifts each year to bless children in need around the world. Parents often use the project to teach their kids about giving. Year-round volunteers support these efforts across the country.

The club also made an appearance at the 2019 Carolinas Psychology Conference at Campbell University in Buies Creek, NC where its members made presentations during the event. “Any SCC student, faculty, or staff member is welcome to join the Psychology Club,” adds Burgin. “You can join any time during semester. You do not have to be a psychology student to become involved in Psychology Club.”

For more information about the club, contact Burgin directly at sburgin@sampsoncc.edu or at 910.900.4088.