[Clinton, N.C.] – A chance meeting is all it takes sometimes. Tony Gonzalez only came out to Sampson Community College’s first-ever Coffee with a Cop event two years ago out of curiosity. While he was there, he met a dog from a police canine unit, a meeting that happened to be photographed and published by a local newspaper: https://www.clintonnc.com/news/9175/getting-to-know-you

That was two years ago. This week, Gonzalez was back at the event but this time as one of the law enforcement officers meeting citizens at this year’s Coffee with a Cop event. All because he developed an interest in law enforcement after he visited and spoke with police officers at the original event.

“His photo was featured in an article for the paper,” said Jennifer Wiley, Basic Law Enforcement Training Director for SCC. “A few months later, he called me to ask about our BLET program here at the college and I told him to come on in. Now he is a graduate of our program and is a police officer.” 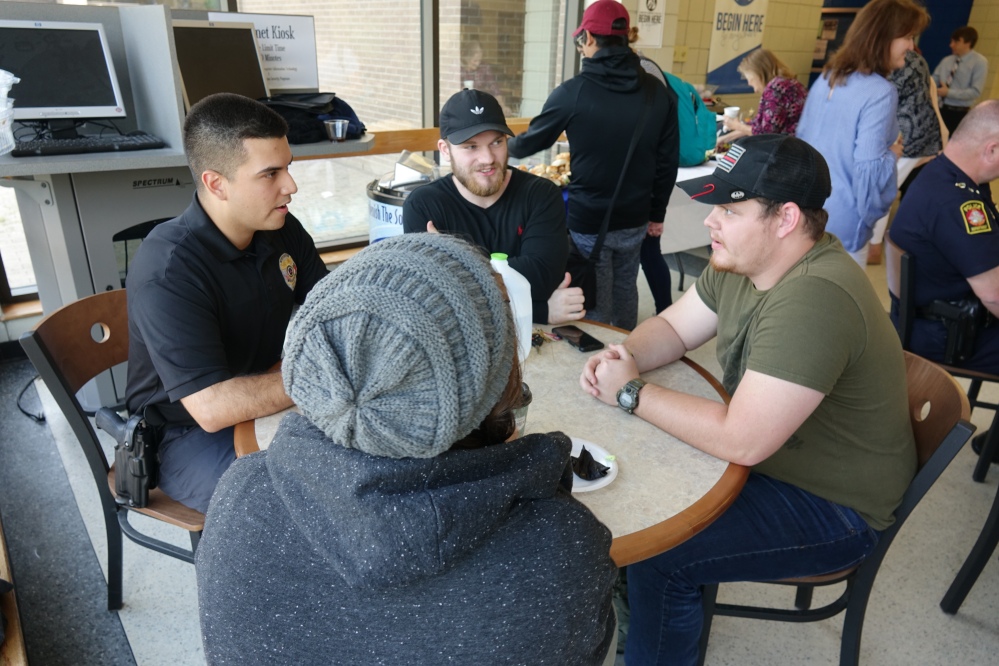 PHOTO: Gonzalez (L) speaks to others interested in a law enforcement career at this year’s Coffee with a Cop.

The youngest officer serving the Garner Police Department, Gonzalez says it is weird the way things happen sometimes. “I didn’t even know I was in the paper, that was news to me,” he said. “All I knew is that I have long wanted a career in something where I could help people—even before I came in for Coffee with a Cop. But who knows, maybe that was the one thing I needed to push me over the top.”

Sponsored with funds from a mini-grant through the SCC Foundation, Coffee with a Cop is now an annual event at the college and Gonzalez says now that he has seen the event through the eyes of a civilian and now as a police officer, maybe something he said to someone at this year’s event might make someone else consider serving their community as well.

Anyone interested in learning more about the SCC’s Basic Law Enforcement Training program, should contact Jennifer Wiley at (910) 900-4054 or jwiley@sampsoncc.edu.