Already known for its diverse educational opportunities such as curriculum courses in everything from welding to nursing, its continuing education classes in everything from floral design to firefighter training as well as catering to early college high school student looking to get a head start, Sampson Community College has added another feather to its cap as a new course takes center stage at SCC.

Stagecraft, a new course created and offered by SCC instructor, Linda Carr, promises to give those who have ever wanted to perform on stage the chance to do so. Carr, who earned her Bachelors degree is in Theatre Arts K-12 from Lees McRae College and a Masters degree in Education in Drama K-12, is no stranger to putting the spotlight on the stage.

“It has been a total joy to work with the Stage Craft class this semester,” says Carr. “I love to teach and watch the discovery come to life before your eyes as students realize they can be creative.”

The course is offered through a hybrid model, meaning students have access to experts in the field on each of the areas of study and complete on-line assignments and once a week attend an actual class where hands-on activities are accomplished. 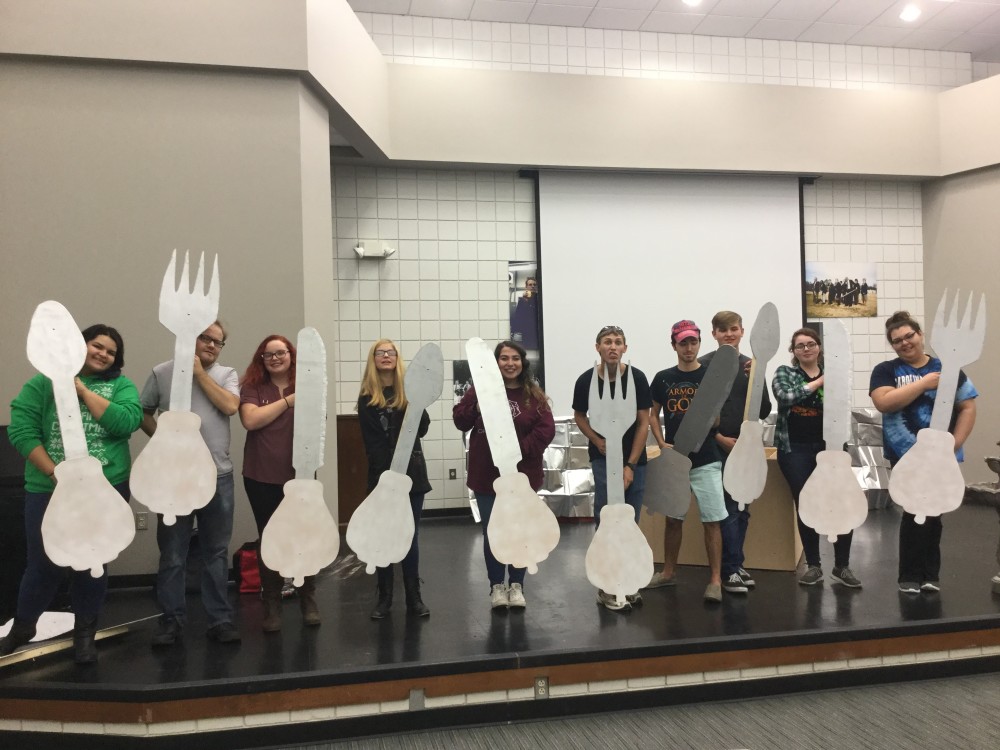 One of the significant successes of the course is its connection to the real world.  Work assignments in Stagecraft at SCC are actually featured in productions at the Sampson Community Theater, so student projects are highly visible even off campus.

Carr believes this experience to be invaluable for students. “Being able to connect our work knowing that the pieces created in the class would be used in a local performance helped the students to have a passionate vested interest in going above and beyond to create pieces they were proud to display for our community,” she says. “We are very appreciative to the Sampson Community Theatre for allowing our finished projects to be featured in the their productions.”

Most of the students in Stagecraft have participated in theatrical performances as actors but only one student has had any experiences working behind the scenes. Nicholas Williamson is a student and an aspiring filmmaker.

Carole Phipps, SCC’s Division Chair of Art & Sciences green-lighted the course to be added to the college’s Associate in Arts program of study.  “Students have been very enthusiastic about the drama courses that were added to the Associate of Arts program,” says Phipps, noting that Stagecraft isn’t the only performance based course added to the program. “Acting I and Stagecraft I have provided new opportunities for students who have a keen interest in the fine arts.”

Phipps points out that the classes are beneficial with honing communication skills, something that may not be tangible but can help throughout one’s college career as well as in other areas. Another unexpected benefit is that students learn to be frugal shoppers. Although the Sampson Community College foundation was able to grant money so the course could have a budget, students learned quickly how to stretch funds by finding inexpensive materials to create their own stage props to successfully bring a story to life.

Carr’s class began the current semester by reading the musical Disney’s Beauty and the Beast and says the students are responsible for knowing all aspects of the intricacies involved in producing a show from ‘the page to the stage’.  All of the students took Acting in the fall and produced You’re Driving Me Crazy and subsequently signed up for Stagecraft.

Dr. William Starling, Vice President of SCC points out that while learning and creating are significantly important, he says one benefit is the one they aren’t even thinking about. “I really want us to be a place young people remember later in life and these classes create those kind of memories,” he says. If you are interested in learning more about the Acting and Stagecraft classes at SCC, call 910-592-8081.

Photo 2 : AnnaBeth Clark shows off horns and hands of the Beast